Written by Jay Hariani
Updated over a week ago

Contract Award information is searchable via three separate search pages on GovTribe, sorted under the Awards section of the navigation menu. 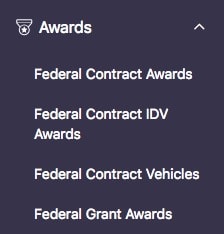 The first three items of this menu section are related to federal contracts, and enable you to search the three levels of the Federal Contract Award Data Hierarchy. The purpose of each menu item is as follows:

It looks something like this from the perspective of the Federal Contract Award level.

And it looks like this from the perspective of the Federal Contract Vehicle level:

These are both in-context representations of the larger Federal Contract Award Hierarchy that can be fully represented by the chart below. Note that the three "levels" of the hierarchy coincide with the three search pages available to you on GovTribe. 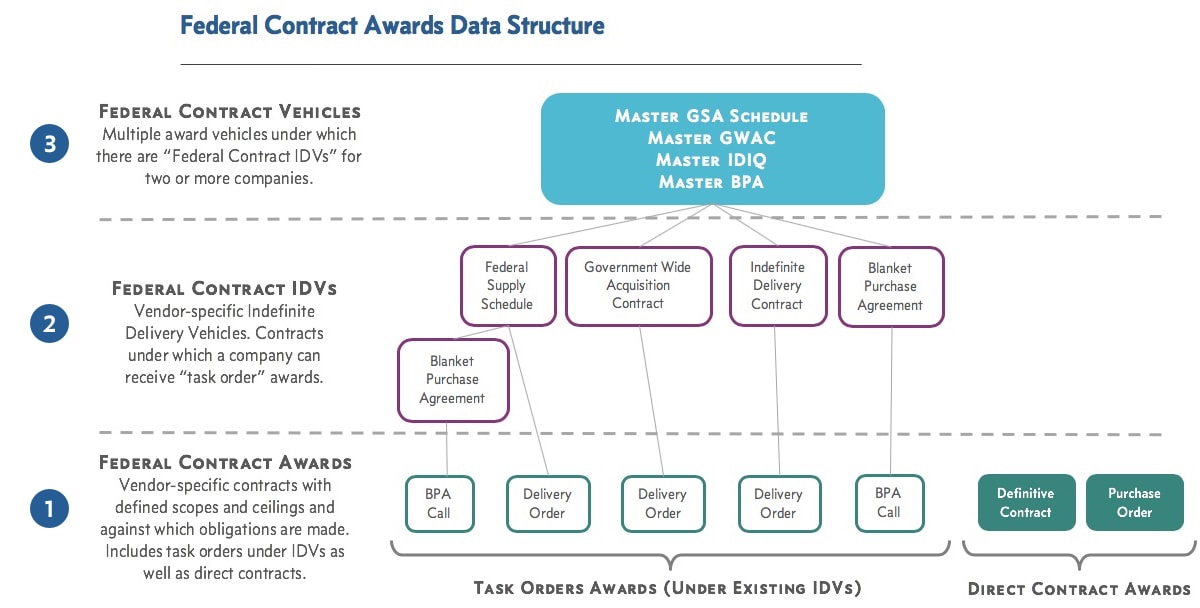 Though the federal government has about a dozen different contract designations, there are really only two major “types” against which money is obligated. Direct Contract Awards and Task Order Awards.

Direct Contract Awards are those contracts that are awarded once, to a single vendor, and without the use of a pre-existing parent contract or vehicle. Direct Contract Awards exist only at the bottom, “Award” level of the contract award hierarchy structure. This means that contract ceiling, period of performance, and all other contract attributes are established through the same contract entity against which funds are obligated. Basically, these are the simplest kinds of contracts to track and evaluate because all of the relevant information is in one place.

There are two types of Direct Contract Awards that you can find in the GovTribe contracts database:

Task Order Awards are contracts that are awarded to a single vendor, but the award occurs under an existing contract (or IDV) that was previously awarded to that vendor. Task Order Awards have their own contract ceiling and period of performance. The parent (IDV) level also has a ceiling and period of performance, but it is usually different than that of the Task Order Award. Further, all the obligation activity happens here, at the Task Order level. Obligations do not occur at the parent (IDV) level, as will be explained in the next section.

There are two types of Task Order Awards that you can find in the GovTribe contracts database:

Above the award level is the Indefinite Delivery Vehicle (IDV) level. There are several types of IDVs, but they work pretty much the same way. Each IDV contract is awarded to a single vendor, and that vendor can be issued Delivery Orders or BPA calls under that IDV. Several important properties exist at the IDV level like period of performance for the IDV (which may be longer than any individual Delivery Order or BPA Call awarded under it), and the aggregate ceiling for all awards issued under it. Obligations do not occur at this level, but GovTribe does provide an aggregation of child task order obligations for every IDV.

There are four types of Federal Contract IDVs that you can find in the GovTribe contracts database:

Note that, as depicted in the diagram, BPA IDVs can be awarded directly through some sort of open competition, or through limited competition under a Federal Supply Schedule. When a BPA IDV is awarded under a FSS, GovTribe provides the entire chain of ancestors so you can trace a BPA Call back up to the BPA IDV, and again to the FSS IDV.

Not all Federal Contract IDVs have a parent Contract Vehicle. FSS IDVs and GWAC IDVs always fall underneath a Master Vehicle, however IDC IDVs and BPA IDVs can also be single-award. That is, only a single vendor was the winner of a procurement process that resulted in an indefinite delivery contract or blanket purchase agreement. For those single-award IDVs GovTribe still consolidates the child Task Order Awards, but there is no parent contract vehicle in the hierarchy. The details page for a Contract IDV will indicate whether it is was part of a single- or multiple-award procurement.

It is also obvious from the chevron graphic at the top of the detail page for any Contract IDV whether a parent Contract Vehicle exists.

Further, GovTribe also allows you to filter by this trait on the Federal Contract IDV search page. 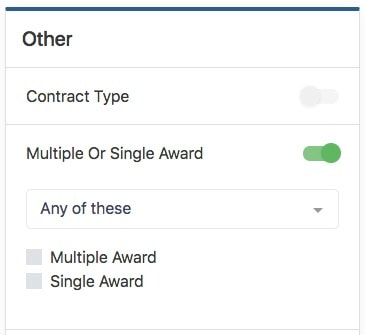 On GovTribe, we distinguish between Master GWAC and GWAC IDV, using those terms, for each type of Master Vehicle and IDV.

There are four types of Master Vehicles that you can find in the GovTribe contracts database:

Did this answer your question?