Written by Jay Hariani
Updated over a week ago

GovTribe does real time acquisition and integration of subcontract award data. The source for this data is USASpending.gov. That is the site to which the federal government is required to report subcontract award data in accordance with the Federal Funding Accountability and Transparency Act (FFATA).

For this reason, meaningful aggregate analysis of subcontract award data is not really possible. That is, you can look at who the top subcontract awardees are in a specific market segment, but you could not be confident that the story told by the data was accurate. The vendor showing the most subcontract award dollars in FY 2018 under DHS, for example, is really just the vendor who subs most often to the prime contractors who reliably report their DHS subcontract awards.

Viewing a Vendor's Primes and Subs 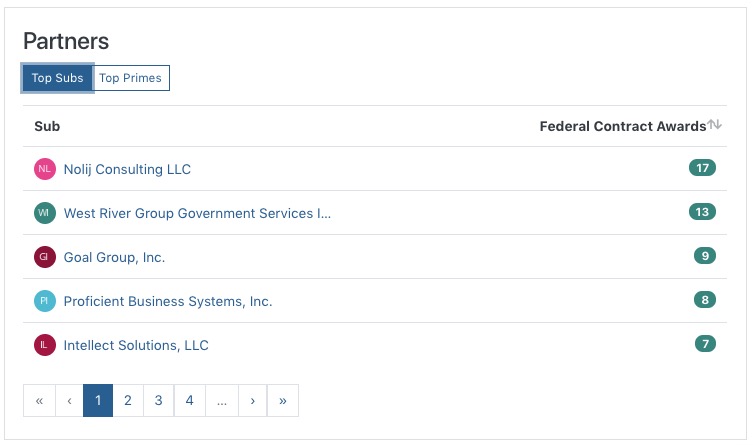 You can toggle between Top Subs and Top Primes to view a list of the companies that vendor either awards subcontracts to or receives subcontracts from, respectively. Next to each company name is a badge that shows the number of Federal Contract Awards on which the indicated company and that Vendor have partnered.

Click on the numbered badge, and you will be taken to the Federal Contract Award page, filtered to that particular prime/sub relationship to view the relevant Awards.

You can, of course, from a blank Federal Contract Award search, manually fill out the Awarded Vendor and Sub - Awarded Vendor filters with company names to see if there is any reported history of a sub-prime relationship. However, it would likely be more expedient to search for one of the companies on the Vendor search page and then review the Partners section to see if the second company is listed.

Viewing the Subcontract Awards for a Specific Prime Award